Since our last newsletter, “Whirligig!” has received reviews by four more outlets—the print edition of Shindig! Magazine (Issue 85), Liverpool Sound And Vision, Gonzo Reviews, and Pure Pop Radio. Check them out below! 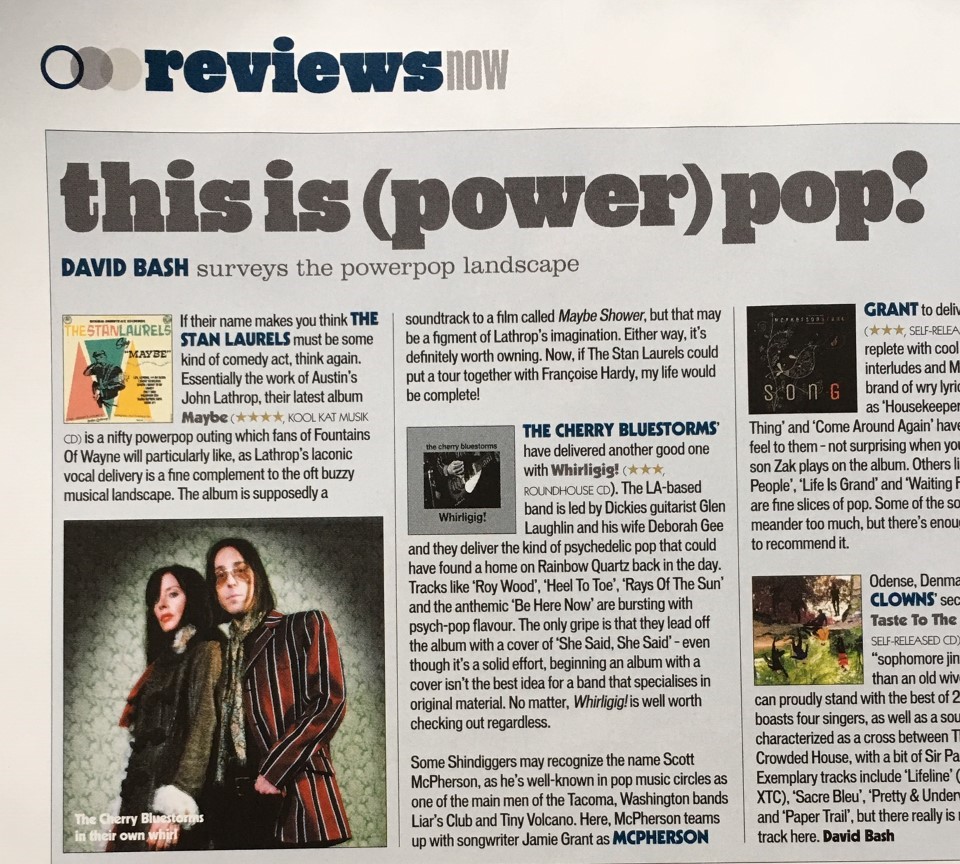 LIVERPOOL SOUND AND VISION
“…In Whirligig! there is still the status of feeling a different kind of pulse moving under the skin, the theatrical measure is still there but it has shifted, more dynamic, more accessible perhaps. It is in that new-found pulse that songs such as Heel To Toe, Rays of The Sun, Seven League Boots, Purple Heart Magic, Brighter Days, Each Mortal Day and the sublime cover of The Beatles song She Said She Said come alive, the Whirligig! being driven by the power of an inexhaustible pump, of new release and sparkling ideas. The Cherry Bluestorms have been ahead of the tide and game for a long time, the way they refuse to bend their heads in the face of overwhelming mundane thought from others is a testament to their matchless form. Whirligig! is strength personified, a machine built out of passion to see the great sound continue.” Read the rest here.

GONZO REVIEWS
“Getting nearer to their trademark sixties sound, TCB gift us something of a sonic daydream. Seducing us with everything from lyrical imagery that interjects gentle intervals and softly soaring vocals, ‘Rays of the Sun’ effortlessly enthrals and entices. ‘Seven League Boots’ again invokes the Rolling Stones (particularly the chorus of ‘Let’s Spend The Night Together’, the percussion of ‘Sympathy For The Devil’ and to a small extent ‘You Can’t Always Get What You Want’), to great effect. Contrary to its suggestive title, it’s a more sentimental, patiently delivered track with tender vocals that seem to address us personally. TCBs tap into their collective main vein with ‘Purple Heart Magic’, a track that typifies their majesty, their ear-sorcery and yes, their oh-so habit-forming music that so many folk have missed out on… maybe 2018 will be their year and, by default, our year too. All hail TCB!!!” Read the rest here.

PURE POP RADIO
“Mixing Rolling Stones affects from the Brian Jones era with other mid-sixties sounds, the Bluestorms deliver a smashing collection of songs sure to please. The rolling rocker “Heel to Toe,” sporting a most melodic, very catchy chorus is one such pearl; the flattering, rocky, Gee-sung portrait “Roy Wood,” which quotes the Stones rather cleverly and takes an unexpected turn at the end with a comforting, orchestrated coda is another.” Read the rest here.

NEW INTERVIEW!
SWEET SWEET MUSIC BLOG
Wondering what song Deborah wishes she had written? Or what Glen wants to add to his studio setup? Or what’s next for us at Bluestorms HQ? Click over to this brand new brief interview with Sweet Sweet Music Blog to find out!

SPOTIFY
We recently joined Spotify For Artists and gave our profile (and Deborah’s!) a bit of a facelift. Give our songs a listen, follow our pages, and add us to your playlists! For those who prefer traditional radio, we are thrilled to report that “Whirligig!” has been getting airplay on a variety of stations across the country, as well as in Canada, the UK, and Japan—terrestrial and internet. So tune in and support the stations that have been playing our music (more info on our Facebook page) and call up your favorite local station to request our songs!

CH-CH-CH-CH-CHANGES
As some may have heard, we are relocating Roundhouse Recording and Bluestorms HQ. We will likely be more off-grid than on over the next month or so as we are in the process of nailing down the perfect spot(s), and lots of packing! We won’t be away for too long, however, and we look forward to making more music in the new year for your listening pleasure!